The sun is rising all peachy and I have only a few minutes with a low connection so this is going to be quick. Our weather is holding on the Oregon coast it looks like for a bit yet. Here are a few captures from the last few days.

The brute on Cannon Beach which I walked for 45 minutes to get on the other side of for this portrait.

Sunset at Neskowin with a lone figure standing in awe at its beauty.

First light on shore at Neskowin. 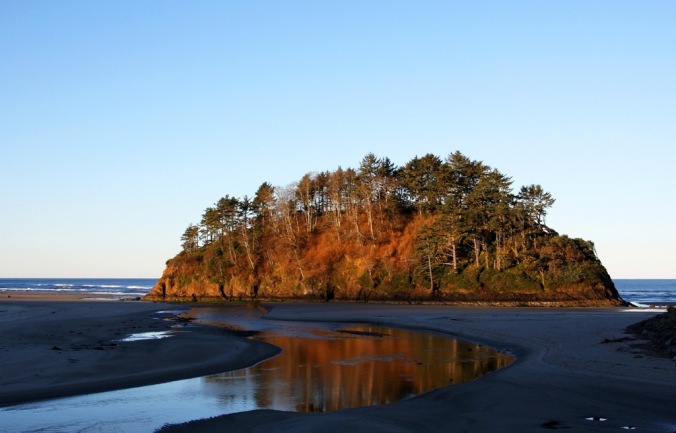 Plein air painting a little later in the morning.

I was photographed by Penny Lulich while we were visiting and I was workin.

As someone commented “a nice place to have an office.” In fact, we liked it so much that we stayed an extra day and watched the sun come up again.

Threading a day at Neskowin Oregon 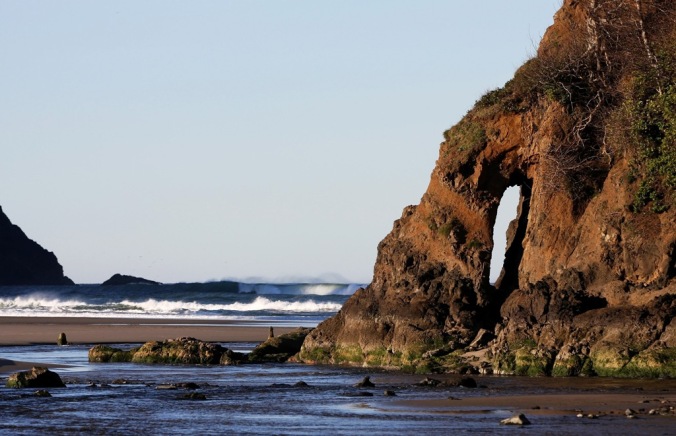 with a long walk up the beach. 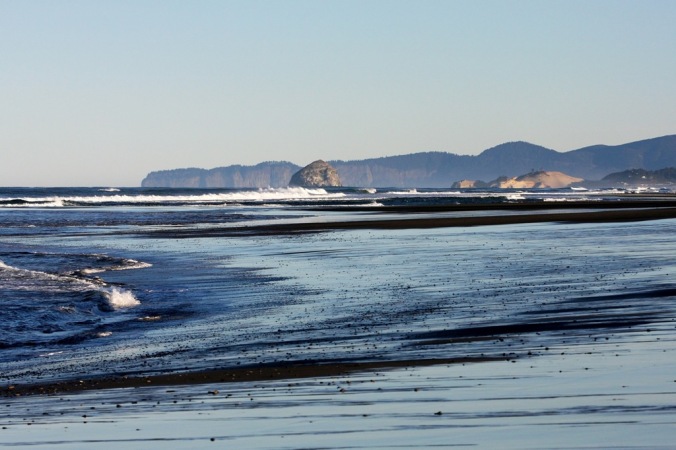 But I did promise you lighthouses and a many devils road and we are about to get to that adventure after breakfast at the Hawk Creek Cafe. Well, maybe we will slip over at Seal Rock for a gander first. 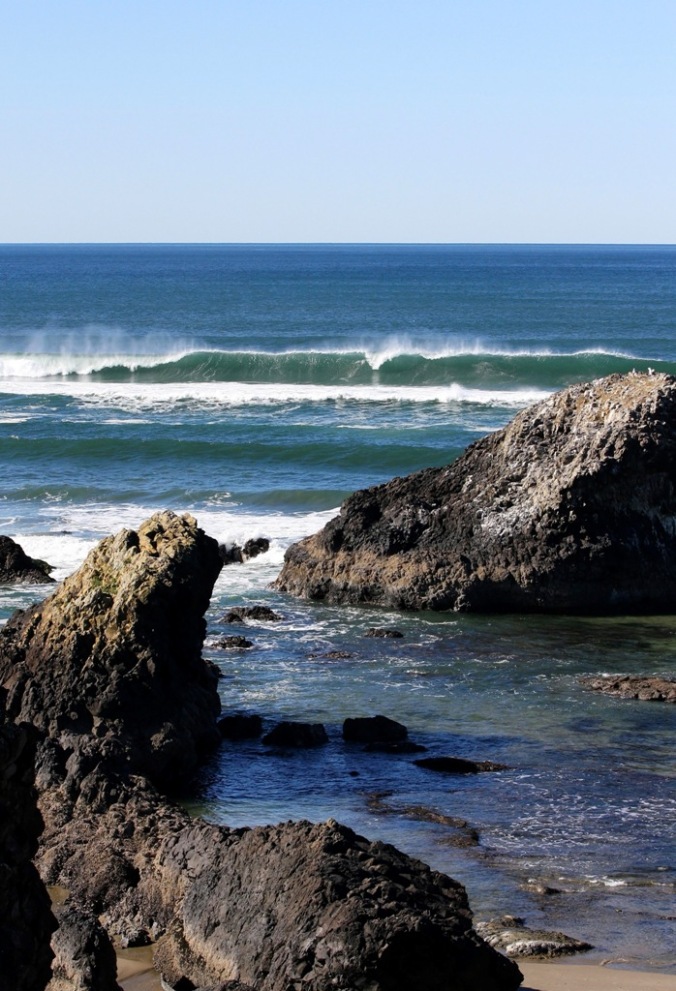 So as you go through Reedsport start thinking lighthouse, any lighthouse will do but maybe start with Umpqua Lighthouse. Nope it is not out on a rock with waves crashing around it but high on a cliff behind a chain-link fence. Still it is a thing of aged beauty and it was time for bread and cheese and a stretch. 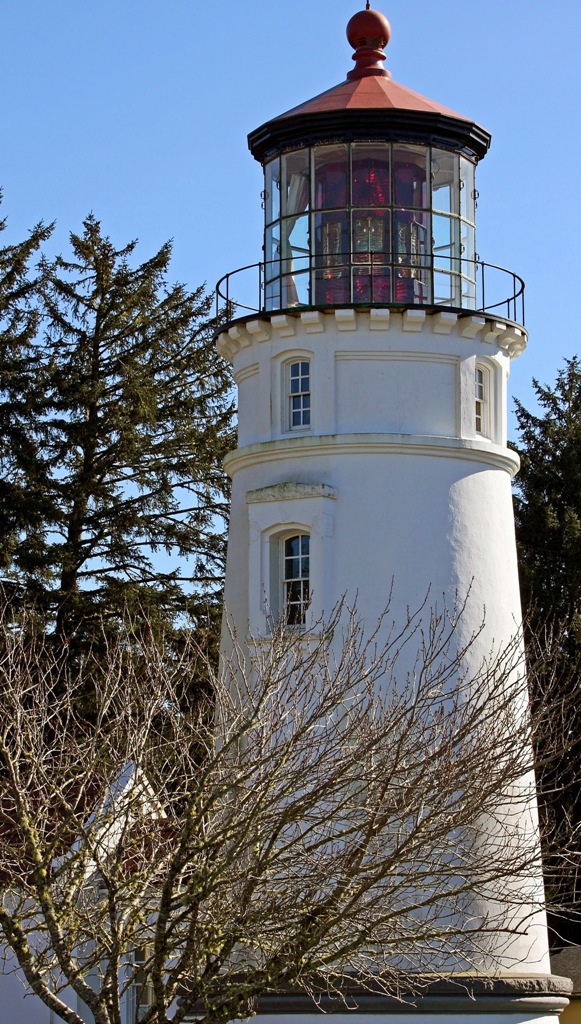 It was after, just as we navigated to the scenic route through North Bend that things got a little confusing. David says “what are you looking for?”

“A lighthouse.” I reply with complete confidence.

“Which one?” he inquires looking at the map.

“The first one.” I confirm. “Someplace near Charleston.”

The GPS is sending us through the city section in a maze of turns until we finally end up at Cape Arago with no lighthouse in site. But there are sea lions on the rocks.

And the view is spectacular 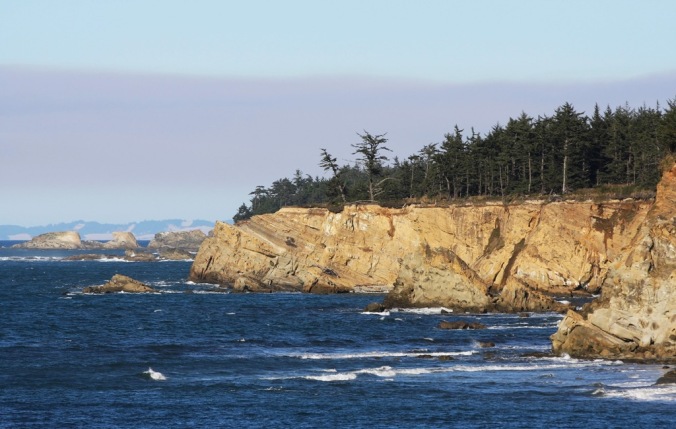 In fact there is a red dot on the far row of large rocks which I later believe to be the missing lighthouse. As we go back the way we came I see it once through the trees but that is it. There is no long access to it according to the section of our guide which I didn’t read until after supper last night. At this point David is weary of stop and go and is just as happy to see me punch in “Bandon” on the GPS. Off we go eventually along Seven Devils Road which I am sure was named to taunt lighthouse chasers.  David has his eyes closed and doesn’t say a word as I get close to Bandon and turn left before the bridge after spotting the sign for another lighthouse. The wind is whipping up sand that sticks to your smile as soon as the door opens. David just turns a little harder into the passenger seat and pretends I am not getting out. I take a couple of shots of the abandon Coquille River Lighthouse but nothing pleases me in the early evening light. I give up and drive us back out and over the bridge to Bandon turning into old town looking for a place to stay. I drive right through and off on a side road that gives me a good view of the lighthouse which I am sure is the reason I just had to go this way. David opens one eye but says nothing.

I pull out the maps and seriously look for a place to stay. We decide on the Bandon Inn overlooking the old town and are not disappointed. We are given a lower than low season rate by a warm desk clerk for a lovely room with a continental breakfast. For my B.C. folks, it could just as easily be the Super 8 in Williams Lake but with a better view.

Today we should find our way through the Oregon Redwoods and maybe into Northern California. I do see a couple of lighthouses on the map at Crescent City…. shhhh! Don’t tell David. He is still sleeping and it might give him nightmares.

When was the last time you were on a wild goose – lighthouse – chase?