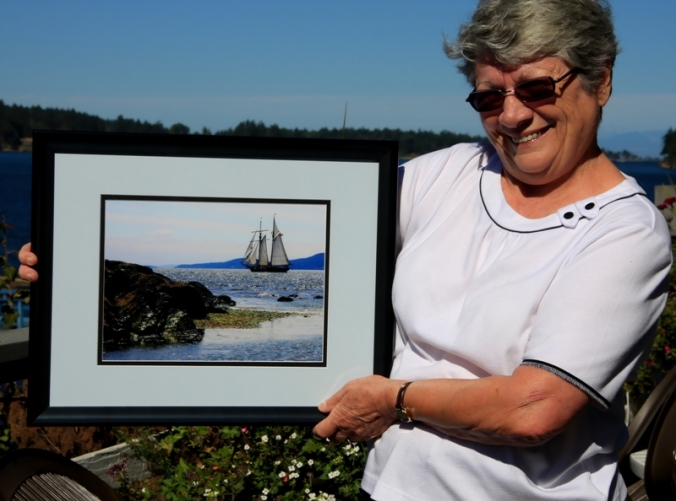 A schooner sails back to Mayne Island from White Rock but not under its own steam. The photographic print was transported by Marg Milan on B.C. Ferries. Marg called me a few weeks ago to say that she was coming over to Mayne Island as part of a tour. She wanted to meet me let me see how lovely her print of “Sailing Ship Navy Channel” looked once it was framed. Didn’t she do a great job of choosing the right matting and frame? I coaxed her into letting me take her photograph with the work. We had never met before but I can sense we shall meet again. We connected when she inquired about this image after it had been published on page 12 in the May 27, 2010 issue of the Island Tides regional newspaper.

I thoroughly enjoyed listening to Marg talk about why she like the image and tell me things I hadn’t notice such as the lush green of the seaweed in the foreground. Thank you so much Marg for sharing your pleasure with the framed piece of art that now hangs on your wall.

Sprout Question: Who has recently shown you aspects about your work that you haven’t notice before?

Dear readers my image Reef Bay in September has also been published on page 13 of the most recent September 30, 2010 issue of the regional Island Tides newspaper. This paper publishes over 18,000 copies every other Thursday and covers many of the west coast island communities. The half-page photo is tagged with “Mayne Island’s Reef Bay—September morning mist drifts in from the Strait of Georgia. Terrill’s one-woman show of photos and paintings ran till September 22 at the Mayne
Island Library.”

Important: If you want gift cards, calendars, photographic prints before Christmas, October is the time to place your order at http://www.redbubble.com/people/terrillwelch. Original oil paintings can be purchased directly from me by sending an emailing to tawelch@shaw.ca .