Only poets settle the irritable edges of an uninterrupted day:

for the sanctity of coffee, fruit and yogurt.

Sprout question: What might settle an irritable edge on your creative day?

It is morning on Wednesday October 13, 2010. We pack quickly to leave our Mayne Island home and stay overnight in Victoria. We are going to see a screening of a new documentary film Winds of Heaven: Emily Carr, Carvers and the Spirits of the Forest by Michael Ostroff. The write up about the film was one of the few items noteworthy in our withering Saturday addition of the Globe and Mail national paper –which recently went glossy and appears to have dumped the last of its journalistic content. Finding reference to my kindred spirit, Emily Carr, has however, saved one of its pages from the recycling box.

Emily Carr, a larger-than-life icon of Canadian west coast art was born in 1871 and died at age 74 in 1945. How dare I be brass enough to call her my kindred spirit? It is because of her ordinariness along with her greatness. She often speaks in humble frustration in her reflections about her paintings and writing.  There are only a few exceptions in diary entries when she allows herself a quiet moment of pride for her accomplishments. One glance at her paintings tells another story. She held nothing back in her paintings. 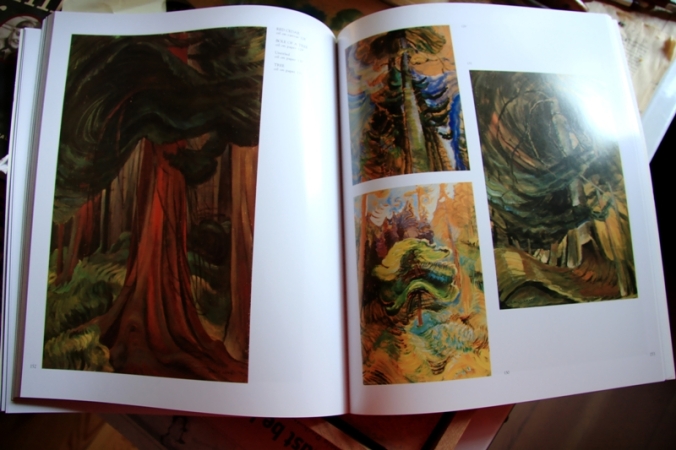 Carr’s powerful strokes and clarity of vision bring large cedars and western landscapes to their knees at the feet of her brush, only to release them again to push skyward across the breadth of her canvas. It is within my experience of this contradiction, and her visceral struggle with her art, that I call her my kindred spirit.

“If the work of an isolated little old woman on the edge of nowhere, is too modern for the Canadian National Gallery, it seems it cannot be a very progressive institution.” Emily Carr, On the Edge of Nowhere Gallery quote

When doubts and fears about my ability as an artist threaten to keep my brushes from the paint or my fingers from pressing the camera shutter down, I read the diary pages of Carr. I know if my tears leave stains on the pages she will understand and that we will both be out of bed again in the morning, giving it another go – together.

I now have a new reference point to breathe vitality into Carr’s life and work. It is Michael Ostroff’s documentary film Winds of Heaven. Michael spoke about the difficulty of finding a fresh approach within the many fingerprints that traipse across all primary source documents of Carr’s writing and the many eyes that have critically gazed at her sketches and paintings. Well, in my opinion, he has brought the spirit of Emily Carr alive with the same strong powerful impressions, skillfully tethered together, as Carr did in her paintings. The documentary is being screened across the country and will be released in March. I plan to add one of the DVD’s to my library shortly thereafter. I want it close by so it is within reach when doubts raise their sneering heads in the corners of my studio. Then I will then count my blessings.

“I think I have gone further this year, have lifted a little. I see things a little more as a whole, a little more complete. I am always watching for fear of getting feeble and passé in my work. I want to pour till the pail is empty, the last bit going out in a gush, not drops.” Emily Carr, On the Edge of Nowhere Gallery quote. 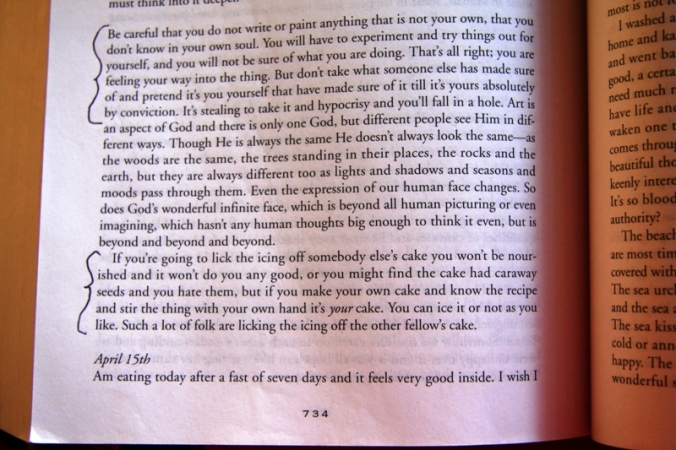 Carr had no digital camera and sketched quickly with oil on paper before working up her paintings back at the studio. I can both sketch and take a photograph for reference. Carr had no community of contemporary artists to muse with her through her blog, twitter and facebook. She had to write letters and send them by post to her friend Lawren Harris. He had to reply in the same manner. Something I would find too tedious for daily inspiration. In poetry she had Walt Whitman where I have both Whitman on Mary Oliver. She was isolated in her work as much as she was in her geography.

When, even now women represented in museums around the world is only about 5%, she would not likely have called herself a feminist or a ground breaker for women’s art. She would likely have said that she was an artist who just happened to be a woman. Indeed, if a showing a few years ago at the Vancouver Art Gallery of women artists who were her peers are any indication, she would be right. Her work left those of other women artists in a shadow of insignificance. To be fair, gender may not be the deciding factor of what art work is left in her shadow.

Next, I will give thanks for each diary entry, and each story in the 893 pages of her writings. Finally, I will bow my head in gratitude for the dedicated work of Ira Dilworth, Doris Shadbolt, and now Michael Ostroff for ensuring that I have these unique views and access to the life and work of Emily Carr.

After the screening, Michael Ostroff commented during the discussion, that he wanted to “put Carr in the context of her time.” He has done more than that. He has put British Columbia in the context of its time. He shared her struggle to create a vision as it took him five years to find the funding and complete this incredible film which includes our experience with rugged wilderness and history of unsettled land claims.

Through my life as an artist going right back to childhood, Carr has always been just out of sight, leaving me marks to follow as I forge my own artistic path. I feel Carr’s kindred spirit as I work – not in her brush stroke but in the strength and reverence for her west. I am not a scribe for what is before my eyes but rather that which is before my heart. My Emily understands this. I can tell you facts about her life – such as her breakdown while going to art school in Europe or the 15 fallow years when she lost her will and only painted seven works and stopped writing in her diary. I can tell you that her best work came after this time while she was in 50’s. I can tell you that she was loved but never married. I can tell you these things but it will be far more meaningful if you read her writings for yourself and if you browse the pages of Doris Shadbolt’s The Art of Emily Carr or if you go to The Greater Victoria Art Gallery and stand in front of her paintings and see the trees swaying as they reach skyward or if you watch Winds of Heaven by Michael Gostroff – a documentary that adds value and depth to all other experiences of a Canadian artist, a great artist, a woman artist, Emily Carr. May you also know the life and art of the Emily who sits beside me as I work.

Sprout question: What great artist encourages you while you work?